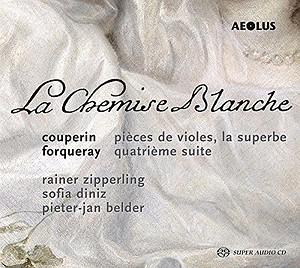 Although Francois Couperin and Antoine Forqueray (Viola da Gamba) often played together in Versailles, they were very different musical personalities. Couperin was regarded as the ideal type of French music with its affective aesthetics. Forqueray on the other hand used the robust, highly virtuosic style of Italy. Together with Pieter-Jan Belder and Sofia Diniz, Rainer Zipperling presents the works of the antipodes, which show their contrasting musical characters. After leaving high school, Rainer Zipperling began studying music and musicology. His particular interest in Baroque music induced him to further his studies in the Netherlands, the pioneer country of authentic performance practice. He is now one of the most renowned cello and gambe players in the world of early music. He is co-founder of Camerata Koln, but has also played with a range of other notable ensembles. More than 400 recordings verify his professional career as a soloist and accompanist, whether with John Eliot Gardiner and the English Baroque Soloists or the Orchestra of the 18th Century conducted by Frans Bruggens. Apart from his performance work, Rainer enjoys an excellent reputation as a teacher of the cello, viola da gamba, and chamber music working principally at the conservatoires in Cologne and Leuven/Belgium.