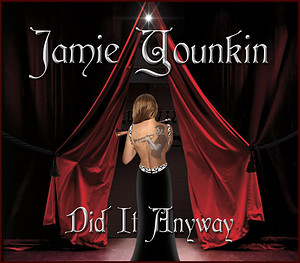 The title of Jamie Younkin’s debut album "Did It Anyway" sends a gleefully defiant message to all of the mainstream musical norms she dynamically transcends on an album that is ultimately the perfect soundtrack to a dreamy, romantic evening full of artfully re-imagined standards and sweet gossamer originals. Is she a trumpet player who sings or a vocalist who plays trumpet?

It’s the same question we still ask about Chet Baker, and we ponder a bit in thinking about smooth jazz great Rick Braun’s recent discography. Yet it’s refreshing here because she’s perhaps the first female impactful enough to prompt the question. Here’s one writer’s answer: Jamie’s sensual, ethereal voice is the emotional hook, but it’s her trumpet – used a full collaborative voice, not simply a gimmick or occasional solo instrument – that lingers in the heart long after each tune wraps.